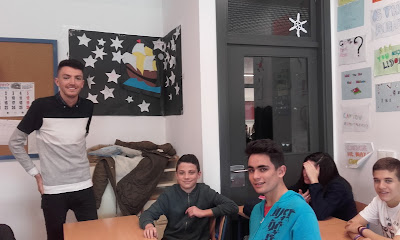 My name is Edward Kennedy and I am currently working as an Auxiliar de Conversación at IES Chaves Nogales in Sevilla.

First of all, I would like to say to you all that I could not recommend this program more. It is truly a life changing experience (and for me anyway, it has really made it clear to me what I would like to do in life).

Although I mention the advantages of this program; that it is not to say it does not come without difficulties. Firstly, moving to a foreign country and leaving behind your family and friends (and especially if it’s for the first time), it can be a very daunting prospect. In addition, adapting to the relaxed Spanish culture and lifestyle outside the school can seem very different and hard to adapt to at first.

With regards to the school, the concept of “heading back to high school” may seem quite daunting especially if you are not much older than the children themselves. However, due to the welcoming and friendly attitude of all Spanish people I have met so far during my time here - any anxieties will quickly fade. Furthermore, when working with the pupils, what I have found useful in my experience is to try and find common ground with the children; in order to create a relationship and understanding with one another. For example, I have found that studying Spanish in university has given me a slight insight into Spanish culture, music and cinema (which can be useful). In addition, as I study foreign languages at university, I can relate to the children and understand the difficulty, at times, of constantly speaking two languages. By telling them my difficulty at times with this, it has prompted more children to try and speak English with me – as I have told them that the ability to speak with a native speaker of English will help them improve greatly (like it did with me with regards to Spanish).

In conclusion, my greatest advice to you all would be to enter this experience with open arms and mind. Try to embrace every possible aspect of Spanish culture and always keep a positive outlook.
Remember - ¡Pásalo muy bien!
Publicado por Equipo de redacción en 2/01/2017